I have been slacking on my blogging duties because I’ve been too busy for such a self-indulgent activity, however, every once in a while comes something that is really worth talking about, and this incredible documentary movie called “Before the Music Dies” definitely qualifies as one such thing. I just finished watching the movie and all of the special features and I am blown away! An “unsettling and inspiring look at today’s popular music industry”, this 93 minute feature film (released back in 2006) ties together a series of interviews with very very notable people to get a point across and to investigate where it all went wrong in the music industry, when we stopped caring and how we went from undeniable talent to no talent. 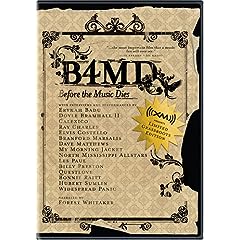 This movie was written, produced and directed by two regular people, music fans from Austin (Andrew Shapter and Joel Rasmussen), who without any prior experience in filmmaking created a movie that IS great and even looks great (it never looks like a low budget film, it’s edited tightly, it’s got good cinematography and never drags).

It starts with some archival footage of Ray Charles accompanying an incredibly great singing and dancing performance by Billy Preston but soon gives the lead to interviews with Erykah Badu (who has some of the best, funniest and most controversial things to say), a very passionate Questlove, a disillusioned but re-affirmed Doyle Bramhall II (also performing with Eric Clapton), a transparent and down to earth Branford Marsalis, a comfortable Dave Matthews, an incredibly sharp and sensitive Les Paul (as always!), a knowledgeable and experienced Bonnie Raitt, short snippets of  interviews with Elvis Costello and Hubert Sumlin as well as Calexico, My Morning Jacket, North Mississipi Allstarts, Widespread Panic and some others…

Narrated by the great Forest Whitaker, the film talks about the disappearance of talent and original music in the wake of big label marketing, the promotional power that radio has lost in the wake of its flattening content-uniforming conglomeration under Clear Channel, the fact that most of the few talented people today barely even stand a chance of being heard (although this is not entirely true if you consider and you harness the power of the internet, which the movie sadly doesn’t talk much about) and even attempts a challenge of recording and shooting a video clip with a good looking un-talented singer to prove the point that you can promote pretty much anyone that looks good even if they have no talent because the technology allows us to do so today.

The sweet naivety and the undeniable passion shown in this movie are charming and inspiring. What really comes through and what makes this film so special is that it comes from the heart (like Sumlin says) and it really does come from a fan’s perspective, with great clarity and intelligence.

Thanks to the internet, it is extremely easy for everyone to see this movie (thankfully!). As a matter of fact “Before the Music Dies” pioneered a very unique distribution model consisting in allowing you to buy the full DVD with all the extra content (extended interviews and performances) for $16.99 or to buy a full-resolution DVD quality download for $7.99 or a DRM-free compressed download for portable devices for $2.99. Remember this was 2006! Two years later I don’t know of anyone else who distributed their movie this way.

Please go out and get a copy… let me rephrase… please go to the website and watch the preview and then download or order a copy of this great movie. If you are a music fan you owe it to yourself!